The duality of romanticism

As an historical movement involving poetry, thought, music, painting, but also in the common use of the word, « romanticism » is generally caracterized as seeking for harmony. Magali Sanheira’s Fleur bleue et Rose blanche is a strong a subtle image of romanticism duality : the suspended cut flowers (the blue one inspired by Novalis’ unfinished novel Heinrich von Ofterdingen, is a trope pointing the idea of total harmony ; the white one refers to Die Weiße Rose group of young german dissidents opposed to the oppresive, fascist hitlerian regime) represent actual life, an idea of beauty, but won’t last and will perish.

This simple floral arrengement inspired by the japanese art of ikebana, conveys the same duplicity as of the ukiyô : the ancient buddhic acception of this word is pessimistic, signifying the feeling of sorrow that sometimes causes the disappearance of ephemeral nature. In the Edo era, ukiyô-e becomes the lifestyle of a urban world of pleasures, refined entertainment, soft érotiques : the ephemeral becomes pleasant.

The lardoir (an instument used to insert bacon in pieces of meat) provokes painful sensations, and awakes the consciousness of our bodies, which are both throbbing with life, but will die and rot someday.
Magali Sanheira’s piece formally functions like a surrealist object, as « the chance meeting on a dissecting table of an umbrella and a sewing machine » (Comte de Lautréamont) : like Man Ray’s Object to be Destroyed (1932), a metronome with an affixed photography of Lee Miller’s eye, or Marcel Duchamp’s With Secret Noise (1916), a ball of twine in which Walter Ahrensberg placed a secret object, pressed by two brass plates joined by long screws, Fleur bleue et Rose blanche is as simple as its evocative power is strong.

It can be the starting point of a never ending association of ideas, of intimate rememberings, everlasting daydreaming. It materializes the contradiction between freudian principles of pleasure and reality : one can dream, strongly desire, and desire can be the force that will lead to the realization of a dream, that will make utopia come true. But everyone of us are in our daily lives confronted with the reality principle : we have to deal with the world as it is, to negotiate with established systems, to accept their constraints. Romanticism, as the strongest belief in an idea, in a possible future, is a risk to take : leaping in the void, one might fall… or one might fly. 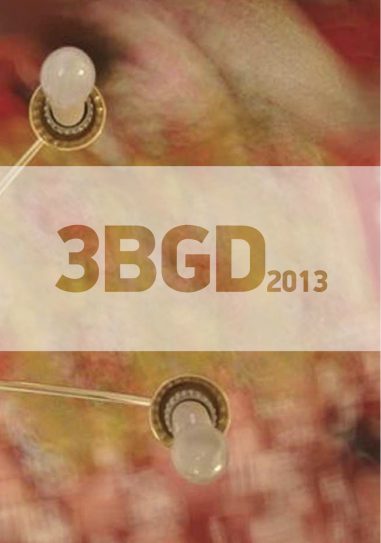 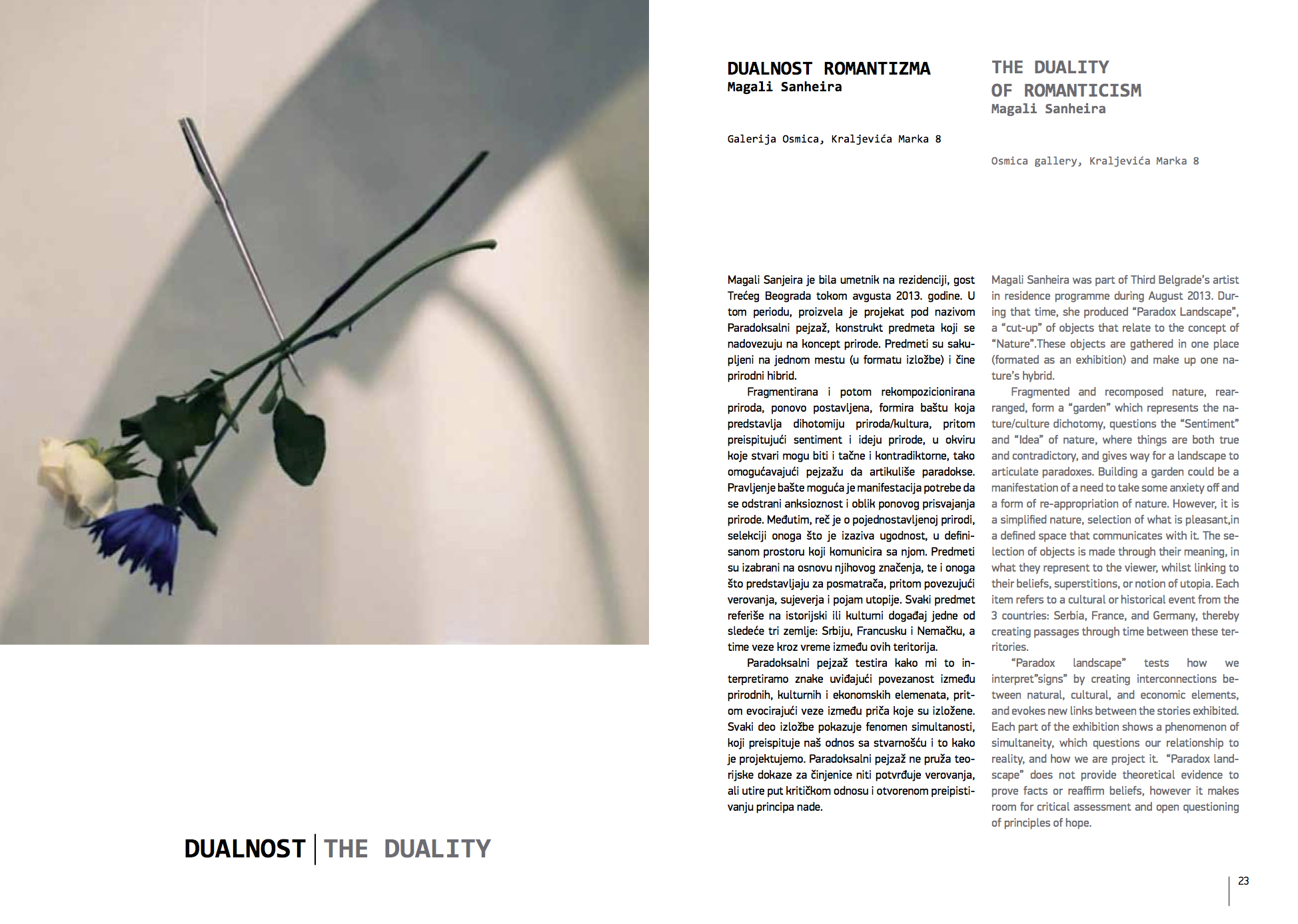 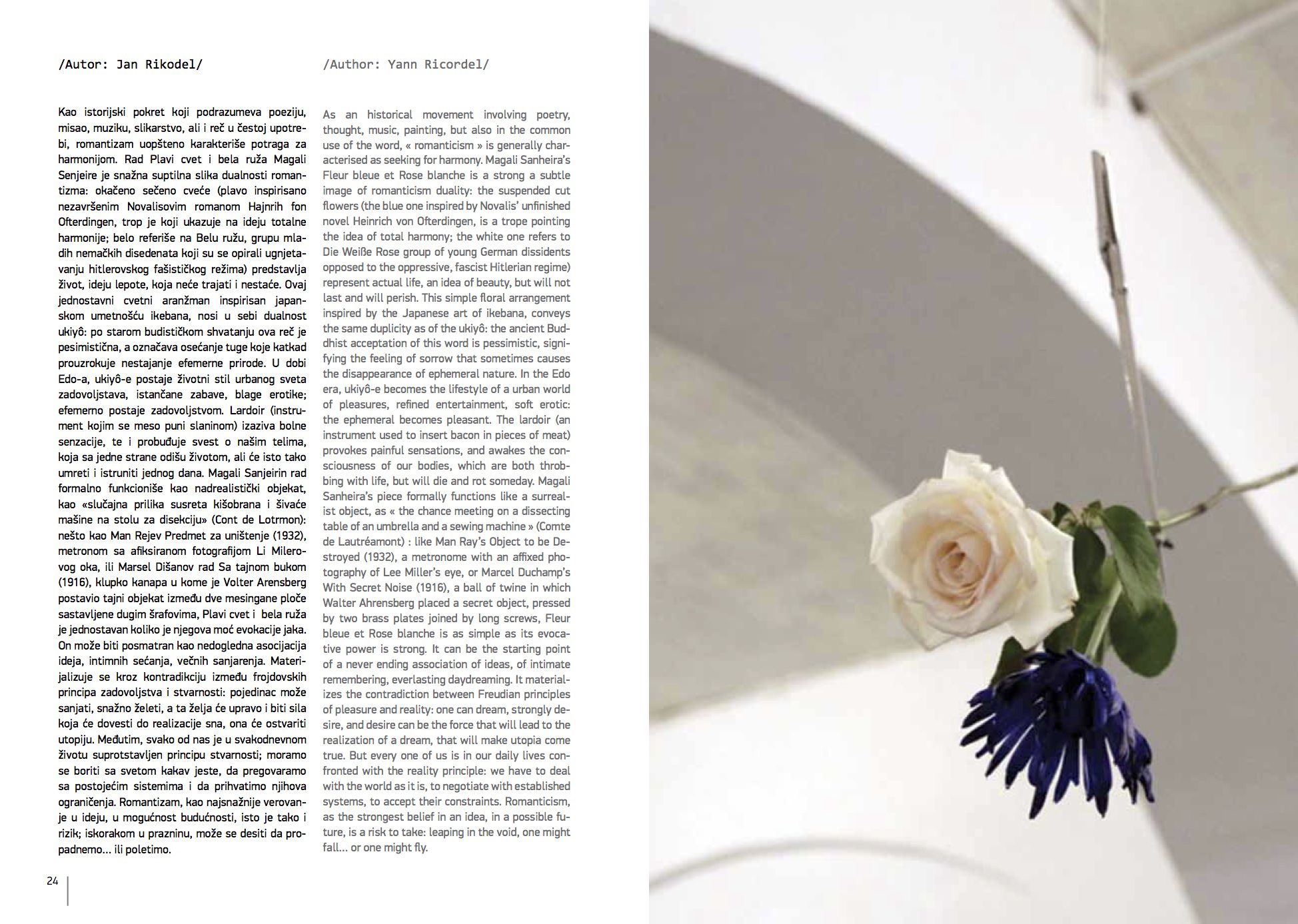