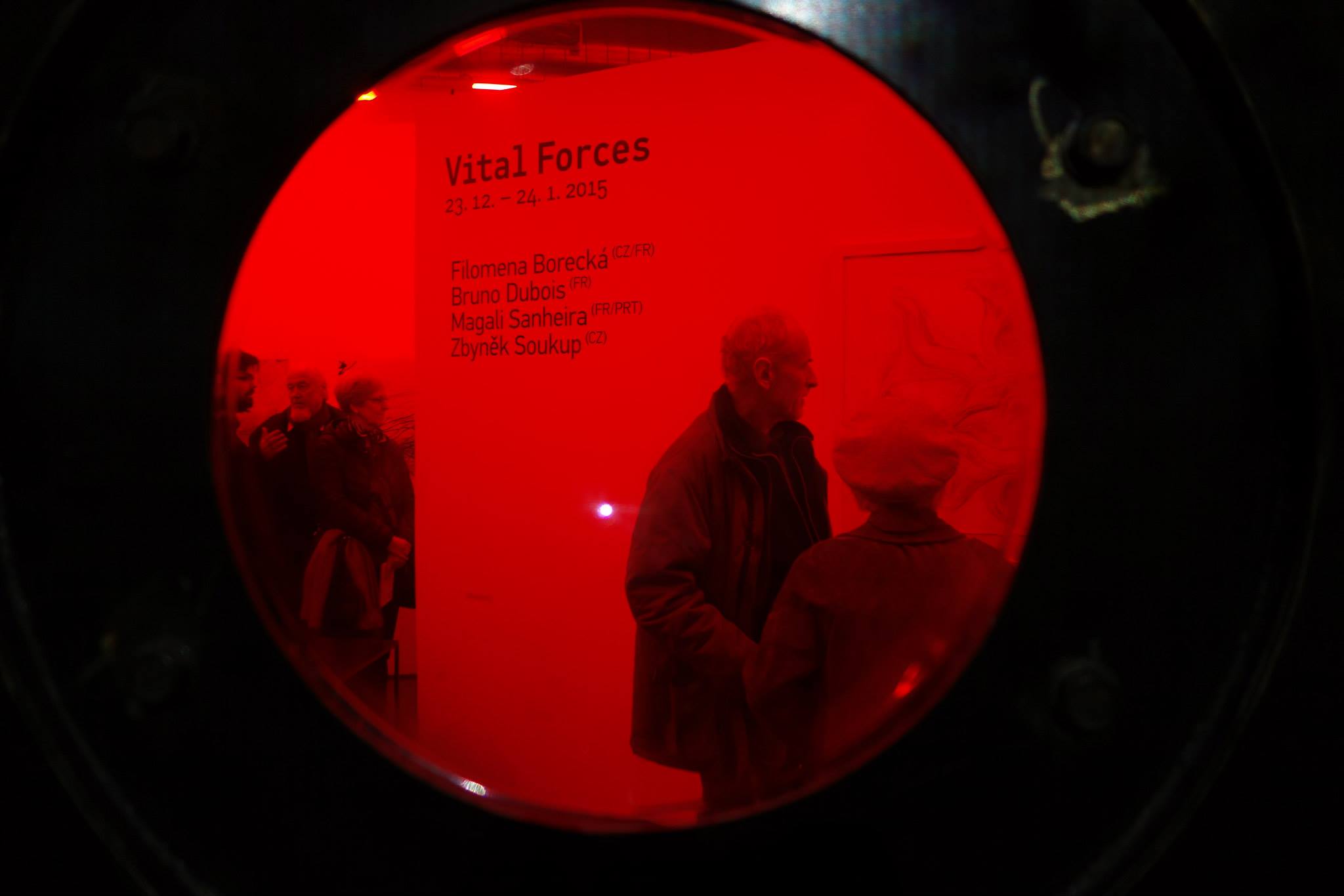 The starting point in process of creation of four authors attempt to freeze in time pulse flowing energy, elusive momentum that compulsive feeling creatively express. What is what makes us stand up, take charcoal or pencil and start to form? The French philosopher Henri Bergson called this sensation term ‘élan vital’ driving force, cause or impulse. The selected authors are trying not intellectually (mechanically), but intuitively elusive track record of this invisible ingredients – ingredients spice of life. Filomena Borecká and author of Portuguese origin Magali Sanheira express their attitude in the artwork or performance, as life itself is a flowing stream of incoming and outgoing events, so intertwined aspects of their work. French designer and artist Bruno Dubois (installation for international fashion labels Lagerfeld and Coco Channel) and Czech designer Zbynek Soukup (Price Designblok Editors) work with the capture of light or light source. So what is a delicate essences, essential ingredients that we ubiquitously and intuitively accompanies the way.

The French Institute in Serbia and the Goethe Institute in Belgrade, in cooperation with the Museum of Contemporary Art Vojvodina (MSUV), initiated the project Memory of Violence and Dreams of the Future, dedicated to the commemoration of the centennial of the First World War, memories of turbulent and violent socio-political conditions, personal traumas, migration and dreams, within a contemporary and artistic context. The project brings together artists from Europe who use, as a starting point, the last 100 years of European history, without returning to the “old debate” on nationalism, imperialism and the issue of blame. With their research they intertwine different dimensions, approaches and issues, the past and the present, relations between the center and the peripheries, aspects of movement/travel, migration and exile, as well as new standards of communication in contemporary local, regional and European dimensions, in times when the examination of constellations and ideologies of the past is becoming necessary for establishing positions in a multipolar world. Through a collective artistic practice, across national borders, the past orpresent, and free of mental constraints, artists from different positions and contexts have the opportunity to explore and create new standards of mutual recognition, respect for differences, networking and strategies against apermanent degradation of knowledge and cultural endeavor.

The project contains within itself several intertwining thematic sections, pointing towards the key elements of the concept. The first is dedicated to the mythologization of the individual act and deals with the influences of social context, cultural models and created myths on the construction of social values of individuals. It problematizes relations within the community, subject to inherited behavior patterns and traditionally constructed values.
The second part of the project is concerned with memories and relationships of the collective and the individual during major social traumas, such as war. It emphasizes the notion of victimhood, the personal and the familial versus the militarized and the ideological.
The third segment is a dialogue between the artistic and historical content, through the inclusion of historical artifacts (films, photographs, objects, documents, magazines, etc.), as well as through the comparison of the past andpresent. It explores the relationship of artistic and historical positions through the engagement of avant-garde art practices, as an approach to art that defined the position of the progressive artist in the history of art. The fourth segment is concerned with the projection of social plasticity, the totality of the artwork, i.e. the shaping of life within artistic experimental practices. It stresses the importance of building positive European values in the future through theproblematization of a common past, in which, instead of dichotomy (positive-negative),the building of multiple views is emphasized, through the expansion and release from one’s own boundaries within art.

Each of the participants of the project finds the starting point for their research in their own artistic position, artwork media, identity and environmental context.Regarding the concept and the implementation of their work, some have found a starting point in the socio-political aspects and the role that Belgrade or Novi Sad had during the First World War, while most started from the position of the city in which they live and work in, finding new relations (Paris-Belgrade, Vienna-Sarajevo, Munich-Novi Sad, etc.). The establishment of geographic relations within the project is particularly emphasized.

Through their origins and their life paths, several artists are related to a number of countries or they currently reside in several cities and regions, maintaining or not maintaining connections to one or the other. These considerations are significant given that the project deals with a world war, which can also be viewed through the change of borders and territories, the transformation of the natural and the urban landscape, the aspect of movement of people, mixing of populations and cultures, resulting in a variety of human destinies.

Memory of Violence and Dreams of the Future highlights not only geographical but temporal relations, as well, therefore, through particular works, the artists intersecta variety of dimensions, approaches and issues of the past and present,using historical artifacts, myths or personal stories, developing their artistic practice through different media, such as: painting, sculpture, graphic design, photography, video, film and installations.